The design of the two known MSX from Takaoka are very similar. Almost the same color palette (tedious beige) and structure. Until the NTT machine's arrival, I guessed the two metal boxes are the same, which is not true, one is a bit wider and lower than the other, and the NTT CAPTAIN Multi-Station have more internal structures holding the cabinet together.

And what's inside NTT CAPTAIN Multi-Station?


Like the external design, the insides of the two MSXs from Takaoka are very similar.

The mainboard is the MSX computer, only the RF modulator and video outputs are in the video daughter board. The modem card is... a modem. So far I do not know how it is seen by MSX. The machine turn on and goes to CAPTAIN menu, even when the modem is not connected to the mainboard.

NTT CAPTAIN Multi-Station uses a Sharp LH0080A (Z80 compatible) as main CPU, the PPI/PSG/etc are integrated in the MSX-SystemII (S1985 from Yamaha) and there are some Mask ROMs and a EPROM in the board. The three M5M231000 from Misubishi totals to 384KB of Kanji ROM. The BIOS and other code are in the socketed EPROM.


Without booting in the MSX mode (and the remote controller is needed to do that) it isn't easy to know how much RAM is present and detected by the MSX. There are six RAM ICs from Mitsubishi and four empty sockets. The silk of those six RAM ICs are very washed, but I read 4464 on some of them. This is compatible with other sources that says the NTT CAPTAIN Multi-Station have 192KB RAM.

About the empty sockets, two have a 4464 silk and the other two a 4416 silk. 256KB is a amount of RAM that makes sense. I believe the machine is ready for 256KB RAM, but sometime in development someone (NTT? Takaoka?) made the CAPTAIN software works fine with less RAM. And RAM costs money, so the machine goes to market with the not traditional 192KB RAM.


The 4416 sockets are a bit more tricky to guess what would be their finality. But the 1986's article gives some light. The article's authors say the minimum requirement to use the designed CAPTAIN adapter is a MSX with 16KB RAM. And this is one of the many clues that NTT CAPTAIN Multi-Station is a derived work of the equipment described in NTT's paper.

The modem have a speed unusual in MSX but common in CAPTAIN adapters: 4800/75bps. That speed and the Z80 SIO are more links between this machine and NTT previous research.


Close to video board we can see the Yamaha YM2413, the sound processor used in MSX-MUSIC and in many CAPTAIN terminals:


Why the adapter in "Videotex Terminal Based on personal computer" did not use the YM2413? Because it did not exist at that time. Yamaha created the YM2413 because the alternatives are too expensive. It's a simplified version of YM3812 (OPL2), which is compatible with the YM3526 (OPL). The YM2413 was released in July 1986, to be used in"data for tone with ROM" video text (captain) and teletext adapters, as we see in the "Digest Dempa, Volume 4":


MSX users knows a similar story with the same results: MSX-AUDIO (Y8950, a cousin of YM3526) was too expensive and the MSX-MUSIC (YM2413) gives a "good enough" sound. MSX-MUSIC wins the market.

The small video board have nothing special:


But, behind the small board, there is something special.


Whaaaaat?? Yes, there is the traditional MSX2 VDP but a lot of VRAM (256KB!!!) and another IC at its side. This makes me remember again the article which states that the CAPTAIN adapter contains:

"(1)MSX-VIDEO(V9938): MSX-VIDEO is a video display controller LSI, which has upward compatibility with the former VDP(TMS-9918A). MSX-VIDEO has many display modes, some of which are especially suitable for videotex application. In the adapter, MSX-VIDEO controls video RAMs and CDC.
(2)CDC(CAPTAIN Display Controller): CDC provides display functions peculiar to CAPTAIN PLPS such as miniblock coloring, 16 out of 4.096-color LUT, flashing, and multi-frame structure."


The V99C37 even had a similar name, it's called VDC, Video Display Controller. While the CAP-M-ST have big similarities with the hardware described in the article, there are differences too, the CAPTAIN adapter have a lot less memory:

In "Japanese Semiconductor Industry Service", from 1988, it's stated that the firsts V99C37 are available from July 1987:


But there are too many similarities to be ignored. My guess is that V99C37 is an evolution of an early CDC design. Present a paper about a physical product in a 1986's conference... probably the CDC and the adapter are from 1985.

We had to wait another year, until finally the "integrated PC type having a decoder function CAPTAIN senior" that would be "developed in the future." It is good to see the various fragments coming together and forming a story

And, in next post, we go back to our  "MSX and video production" series.
Posted by Piter Punk at 6:51 PM 3 comments: 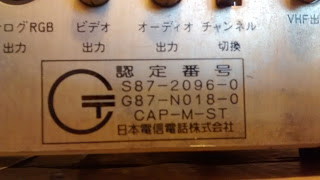 Posted by Piter Punk at 5:23 AM No comments:

Then, searching for these hidden MSXs, I found this machine:


This is the Sony XV-T600, a "Picture Computer", it cames with a small scanner that you can use to digitize any picture:


You can also draw your own graphics using the (optional) trackball and superimpose the pictures and graphics to a live video stream:


Yes, like the XV-J550 uses a MSX mouse from Sony (MOS-1), the XV-T600 uses the Sony GB-6 trackball. And in the back of main unit, we have a MSX compatible cassette connector:


If you are curious about this device features, you can see a XV-T600 "in action" in this video:


Now we only need to link the dots: MSX can digitze images, MSX trackball, MSX interface, Sony built MSX video equipment, this machine needs to be a MSX, right?


Sony XV-T600 have the same dimentions, colors and overall design of XV-J550, which is not surprising, since those machines are part of the same line of video editing equipment.

After opened you can't see any of the ICs associated with MSX, there is no MSX-Engine or MSX-System, no Yamaha V99X8 video processor and no Z80.

The Ricoh processors are RF5C16Y and RF65C027Y. The first one is a Video Controller and the other I guess it's a 65C02 compatible. I did not find the datasheet but the component name (and previous Ricoh's experience with MC6XXX processors). The NEC D1510ACU-608 is a operational amplifier.

I didn't dump the ROMs and, to be honest, after seeing this is not even remotely a MSX machine I lost the interest on it.

Another one to the Not MSX category. At least I can enjoy the GB-6 Trackball.

Posted by Piter Punk at 8:56 PM No comments: