Besides the quantity of expansion slots, Pioneer UC-V102 isn't so different than other MSX2. It's not so uncommon to japanese MSX2 machines with a more "professional" look (translation: separated keyboard) to have special features like genlock, rs232-c or both. No "turbo" mode, no memory beyond the 64KB (minimal for MSX2), etc.

The MSX-ROMs are four ICs, behind a metal bar (the one that holds the floppy disk drives and the expansion slots). They are identified in the silk as MM, ME, RS and DS: MSX Main, MSX Extended, RS-232C and Disk-ROM.


All the ICs are identified by its names in the mainboard, that helps a lot. It's much easier to remove the bottom metal plate from UC-V102's cabinet than to disassemble all the machine only to free the motherboard and see the the PCB from up.

Without the RAM and ROM chips, the main ICs in Pioneer UC-V102 mainboard are:


The only IC that is unusual in MSX systems is the Pioneer PD5044 but, close to it, there is something a bit more unusual, two additional ROMs:

Where those ROMs are mapped?? I had no idea. To be fair with myself, I just noticed them while writing this post, while I was listing the ICs. Thanks to Leonard Oliveira and mars2000you, I did the dump of the 128KB ROM using KANJIROM.BAS and... it's the same Kanji-ROM of Mitsubishi ML-G30:

After this discovery, I made the same test against the other ML-G30 ROMs:

Mitsubishi's keyboard, Mitsubishi's BIOS, Mitsubishi's SUBROM (this one is shared by more manufacturers, probably it comes from a common source, ASCII is a good guess), Mitsubishi's Disk-ROM, Mitsubishi's Kanji-ROM, machine built with Mitsubishi's clones of many ICs, etc. And the questions from the last post that we thought could go unanswered forever now has an answer: very probably Mitsubishi did the UC-V102 for Pioneer.

Like Sanyo built many MSX machines for Philips, looks that this time Mitsubishi built this machine for Pioneer. Even the Pioneer PD5044 could be designed by Pioneer and made in silicon in a Mitsubishi foundry.

Well, Pioneer UC-V102 is still the only MSX2 from Pioneer... 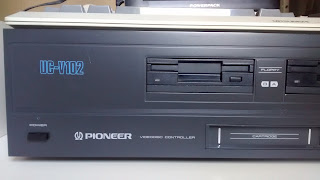 ...but built by Mitsubishi.